skip to main | skip to sidebar

All I Want For Christmas 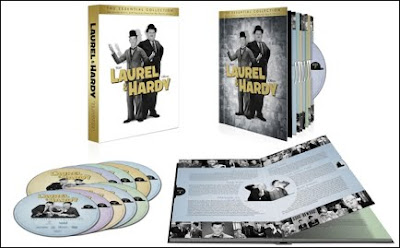 TIMELESS SOUND-ERA FILMS FROM THE LEGENDARY HAL ROACH LIBRARY DEBUT IN ONE EXTRAORDINARY DVD SET
FOR THE FIRST TIME IN THE U.S.

UNIVERSAL CITY, CA – Celebrating the genius of the most beloved comedy team of all time, LAUREL & HARDY: THE ESSENTIAL COLLECTION debuts in a stunning 10-disc set on October 25, 2011 from RHI Entertainment and Vivendi Entertainment. With a comedic style that defined an era and created a legacy that is still celebrated today, 58 of Stan Laurel and Oliver Hardy’s talking shorts and feature films, produced under legendary movie mogul Hal Roach from 1929 through 1940, are now available for the first time in the U.S. all together in one magnificent collection.

Transferred in high definition for the first time and digitally enhanced for home viewing in the finest quality available to date, the set contains favorites that have been enjoyed for generations including Helpmates, Hog Wild, Another Fine Mess, Sons of the Desert, Way Out West, and the Academy Award® winning* film The Music Box.

Additional features include commentaries by Laurel and Hardy aficionados, along with a virtual location map that allows viewers to take an interactive tour of the iconic places in and around Los Angeles where Laurel and Hardy filmed. Available for the suggested retail price of $99.98, LAUREL & HARDY: THE ESSENTIAL COLLECTION showcases some of the most cherished and hilarious films in cinema history and is a must-have for comedy fans and collectors everywhere.